Did you miss the Umbraco Down Under Festival (uDuf) 2018?

Did you miss the Umbraco Down Under Festival (uDuf) 2018? Then you did miss a lot. I've never been to CodeGarden, but with the many stories I've heard, this is the best you will get here in Australia.

In November last year, Peter Gregory posted an announcement in the Australasian Umbraco User Group on LinkedIn and I was hooked. I spoke to my bosses at Get Started  and the CTO, Andy Thompson @andythompy beat me to it and bought me the ticket to uDuf as a gift from Get Started.

Fast forward to 22nd February 2018, I was on a flight to the Gold Coast with my family (the uDuf logo promised sunshine) and we were welcomed with some heavy showers. 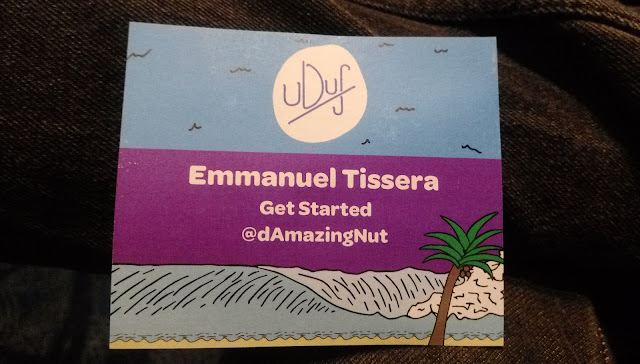 The Hackathon and Bug Fixathon


No rain could keep me away from my first ever Umbraco Hackathon. The Hackathon was held at the Koben offices in Burleigh Heads just 15 mins away from the uDuf venue for Friday. I got in late and the KOBEN digital office was packed with more than 20 developers in their little office. But it was great with Peter Gregory @pgregorynz, his wife Cherie, and their son along with Robert Foster @robertjf72 making everybody feel welcome.

The founder of Umbraco, Niels Hartvig @thechiefunicorn was also in attendance. Anthony Dang @AnthonyDotNet from Cogworks in the UK, did a great job helping us newbies get our (most probably first) Pull Request across. It was great being able to talk to and work with developers from the UK, USA, NZ, Sydney, Brisbane, Gold Coast and from my very own Melbourne. Everyone was quite helpful and willing to share their knowledge as we tackled the various issues on http://issues.umbraco.org and some of the weird setup issues we came across. 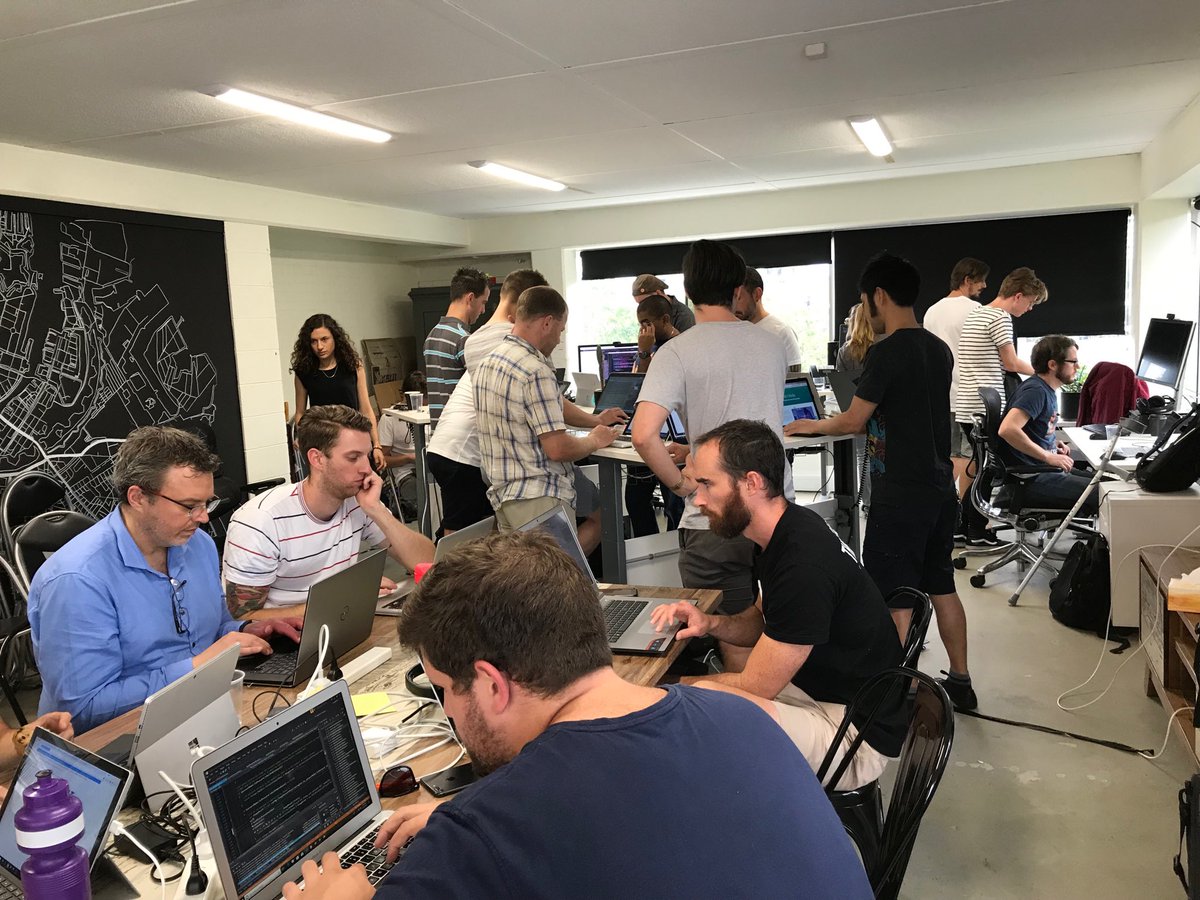 I was able to get a shiny contributor badge with my first pull request approved the next day. That was a great feeling and now I have no reason just to bitch about a bug in the core. I could actually fix it. This quick start guide will give you an idea how you could start on contributing to this great open source CMS too.

My first time (albeit small) contribution to the #Umbraco source.
Got me a shiny contributor badge. [C-Trib] Woo-hoo!
Thanks to #uduf2018, @AnthonyDotNet & @cultiv See: https://our.umbraco.org/member/76771 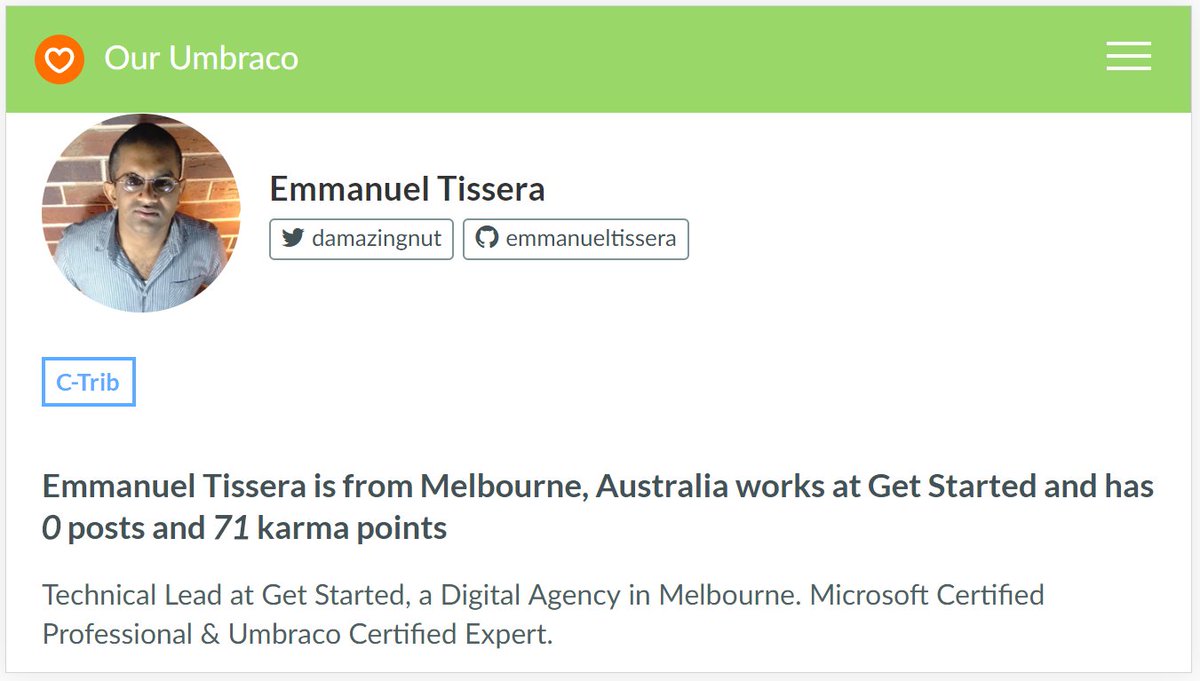 
The hackathon came to an end with the pre-party at the Balter Brewery. Ice cold beer, good food and some stimulating conversations with different Umbraco peeps (I think around 40+) made it a night worth to remember. KOBEN digital had done well by organizing the pre-party and a bus to the Balter Brewery and back to The Star Gold Coast. To be fair to the Umbraco devs, they know how to party and I heard that it continued until 2 AM at The Star. Did I mention that I came along with Family? I was outta there by 10 PM ;) 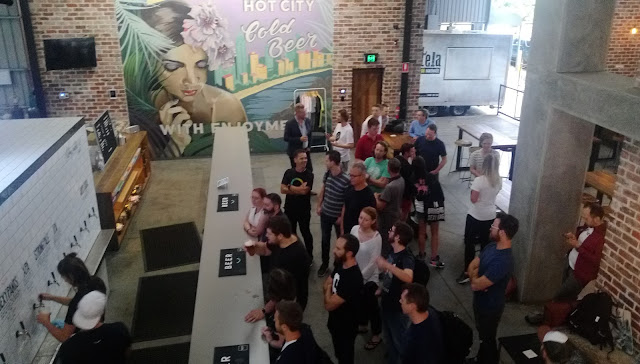 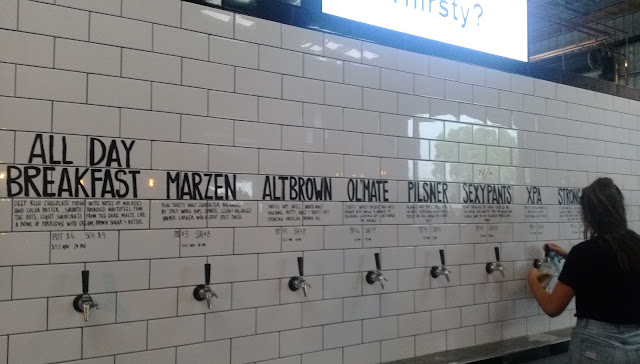 
When I arrived at the Event Centre at The Star Gold Coast, it was already teeming with Umbraco peeps. There were around 60 people in attendance and for a first-time event, I thought it was a very good turnout. Kudos to the organizers for taking that leap of faith to organize uDuf 2018.


With some good coffee and breakfast nibbles in our belly, all of us were ready for the festival to get underway. It started off with a Birthday song celebrating Umbraco's first teenage birthday. Maybe it's time to rebel now? 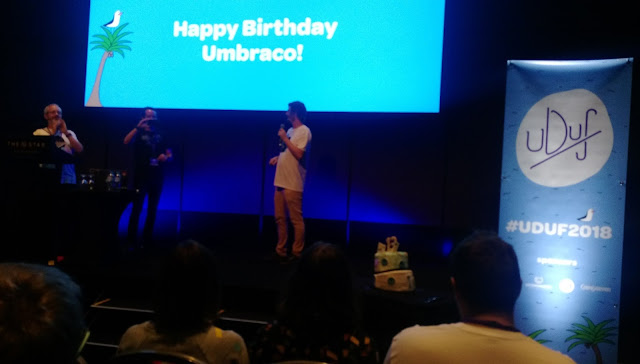 
It was great to hear Niels Hartvig @thechiefunicorn, CEO / Chief Unicorn, Umbraco HQ talk about where we are as a community and what the future holds for the worlds favorite open source .NET CMS.

A few things I did take away from this talk was how the open source CMS is backed by a profitable company. But even though Umbraco HQ makes money from Umbraco Cloud, the target is to only have 10% of 1 Million installs by 2020 on the cloud. This was to highlight the fact that HQ was not an evil mastermind trying to profit from an open-source initiative. Niels also showed us a few numbers on releases and their frequency due to the profit-generating nature of HQ.

I also took away some tips to market Umbraco to the non-techy folks. The super awesome image editor with a lamp sample and call to action tracking on the grid editor is something I'm dying to try out next.

Niels also spoke about the Umbraco Headless and that it's open for beta use. It's the same familiar back-office interface for the content editor with a .NET and NodeJS API libraries for developer integration. I've sent an email asking for beta access. Watch this space for more on that later on as I'm super excited to try this out. 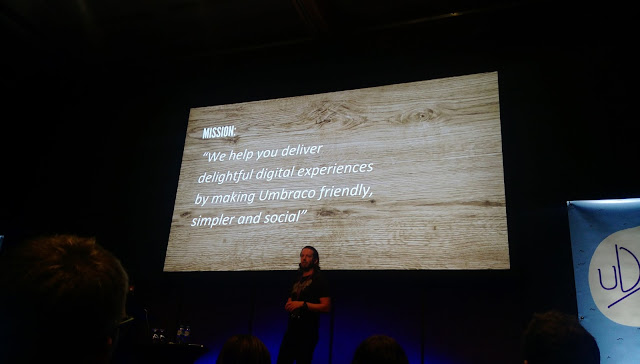 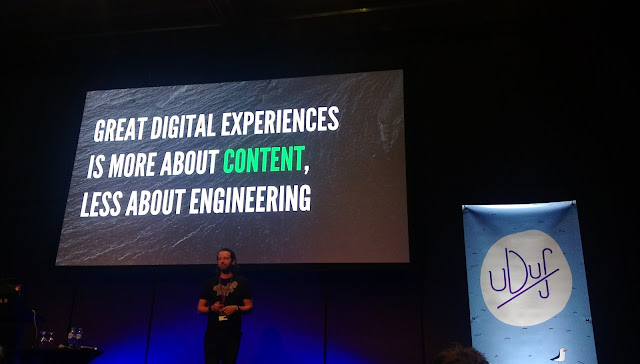 
After Niels' enlightening Keynote, we had the option to split out into either the Technical or Business/Marketing tracks. This is where I wished I could have been in both places. I ended up staying on in the main conference room for the technical track, but I heard many good things about the Business/Marketing track from the folks who went there. I will only blog about what I heard and I hope someone takes the cue and blogs about the business track too. It could convince my bosses to go next year.

What's up with the Business Track?


These are the people and the topics on the Business Track which I missed :(
More details on these talks could be found on the uDuf site. 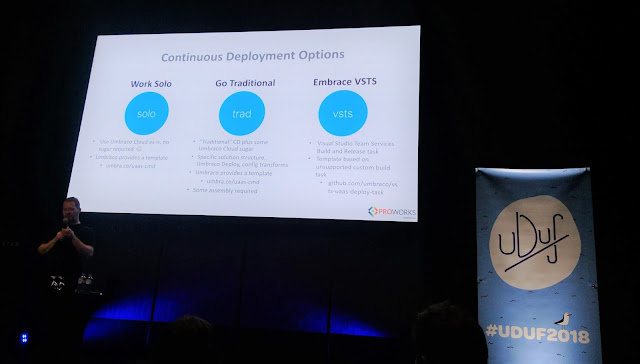 
Robert Foster @robertjf72 took to the stage next and gave us the low down on Forms and how we could extend the Workflows. Robert did some live demos on these extensions and even ended up sending a text message to the lady in the audience (well, somebody wanted proof!). It was great watching Robert who is a pillar of the Melbourne Umbraco Community up there on stage and helping more devs recognize the extensibility of Umbraco Forms. The source code from that day is available at https://github.com/KOBENDigital/BeyondUmbracoForms 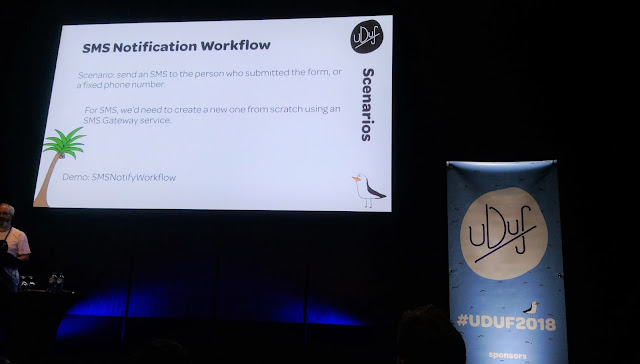 A tale of automation


The heavily opinionated (according to him) Aaron Powell @slace was up next with a tale of Automation. His approach to the problem of CI/CD with CMSs and how he could fix it with Chauffeur was awe-inspiring. Am I going to use Chauffeur after this talk and have a nice shiny big green button for deployment? I sure am. 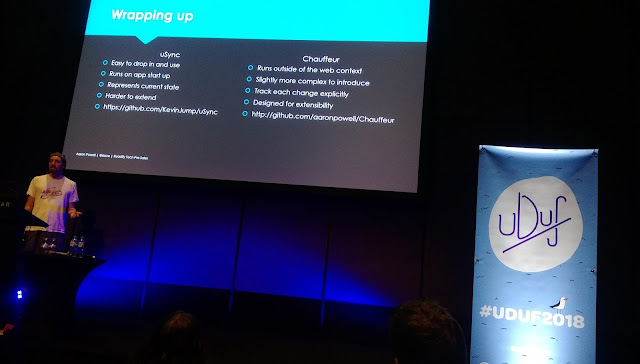 Next up was lunch where I caught up with a few devs (including one from Australian Defence) and learned about devrant and @iamdevloper.


After a good lunch was the Umbraco Expert Panel Discussion with Niels Hartvig, Shannon Deminick, Paul Sterling and Adam (from Cogworks) in the hot seats. It was quite a frank question/answer session about all things Umbraco and it's future. A few of the interesting points which came up were v7.8, v8, GDPR, forms, packages, upgrades, & changes to the partner program. 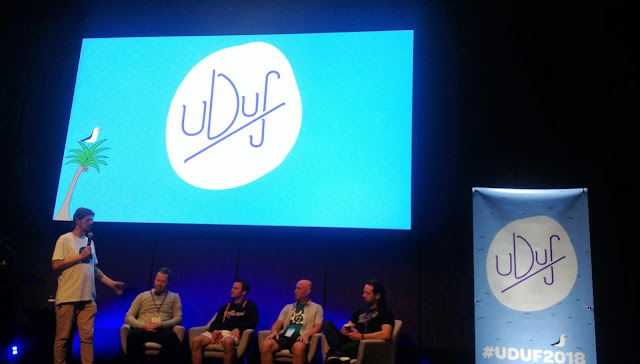 
After the panel discussion, Callum Whyte @callumbwhyte took to the stage to talk about Serverless Umbraco with Azure Functions. While the title was a tad misleading, we did learn how to integrate Azure functions from within a full-blown Umbraco instance using the Azure Service Bus. We did also learn that with the current implementation of Umbraco, using it within an Azure function is not possible. Maybe something which will be possible with Umbraco V9 when it moves to use .NET Standard. 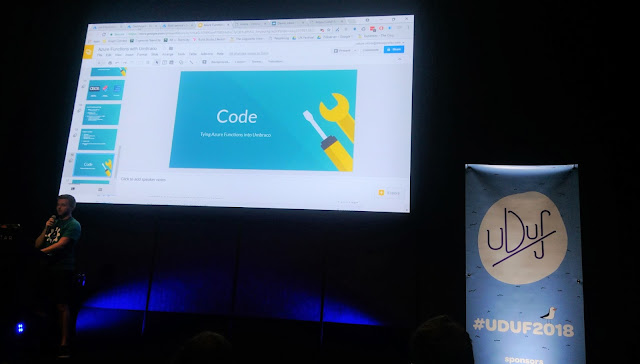 Tea time came up quick and it arrived with a Gelato Cart and more snacks. We were spoilt indeed. 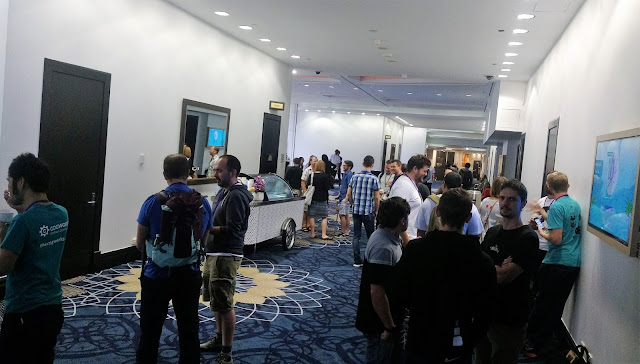 
After tea, excuse me I meant Gelato, up on stage was Anthony Dang @AnthonyDotNet. Anthony spoke about inheriting Umbraco projects from other people. He went through quite a few checklists which could help an Umbraco dev recognize whether they were inheriting a puppy or a skunk. Invert Anthony's slides and it could become a best practices guide. I loved this session and the real life stories which Anthony relived (and most of us could relate to). 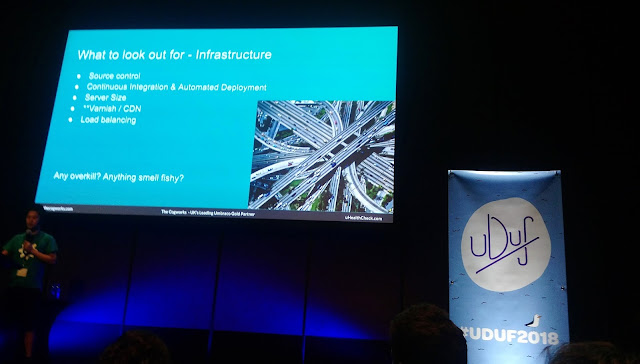 
The Director of Moon-based Operations / Core Engineer at Umbraco HQ, Shannon Deminick @Shazwazza was up next with the endnote on "Developing with Umbraco's new features". This session was packed with what we could expect with Umbraco V7.9, V8, and V9.

He demoed how tours worked in V7.8 and how sensitive values will be hidden to certain users & new logging features in V7.9.

Shannon also spoke about GDPR and how it could even help us in non-EU countries. The question session was interesting with questions about .NET Core compatibility and contextual help for document types (that was me) being answered by Shannon. 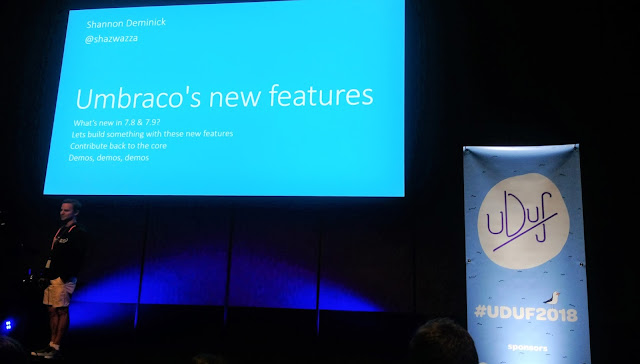 After the endnote, it was the time for the closing with Peter Gregory and Robert Foster taking the stage to thank everyone for these awesome two days. Then we were off again to the bar for some nibbles, drinks, and networking.

The networking was awesome throughout the pre-party, lunch and even the short breaks. It was not only devs but Marketing, Business and few C-level peeps who were around to see where Umbraco was heading. I'm sure there were a few talent scouts and some job seekers/freelancers evaluating the status of the Umbraco job market too. A thing I did hear a few times were the dearth of Umbraco devs for full-time hire outside the agency arena. 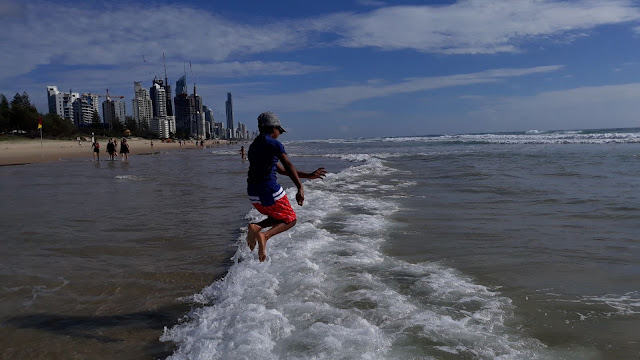 At the end of the festival. This is how I felt. See a few more photos from the festival on my twitter feed @dAmazingNut

Did you miss all of this awesome stuff? Hopefully, there will be a uDuf 2019 which you can join. But while you wait, join us on the  Australasian Umbraco User Group on LinkedIn. If you are in Melbourne, the next Melbourne meetup is tentatively set for the 13th of April set for the 11th of April (Wednesday) at 5:30 PM at the Get Started office on Level 1, 195 Little Collins St., Melbourne Vic 3000. Join us on meetup.com group to keep up to date. Hope to see you soon.
Posted by Emmanuel on Monday, February 26, 2018